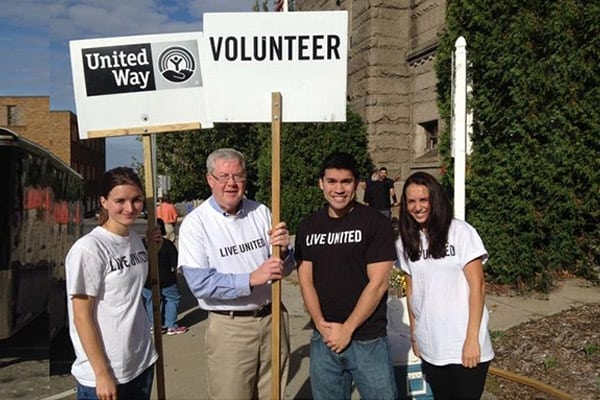 FALL RIVER — A band of United Way volunteers whisked away paper, coffee cups and other litter from the Bank Street area Wednesday morning.

In past years, volunteers painted rooms at the YMCA, cleaned up the playground at King Philip Preschool and completed painting and yard cleanup at the Ninth Street Day Nursery.
United Way Executive Director Bob Horne said the annual event, held in cooperation with the city, is a way to give back to the community.

“We’re committed to the community,” Horne said. “We like to go over and above fundraising. It’s being a good community partner.”
The local event was held in conjunction with the organization’s worldwide Day of Caring.
This year’s event drew volunteers from National Grid’s Somerset office, BankFive, BayCoast Bank, St. Anne’s Credit Union and others.

“It’s great,” said Dan Abraham, chairman of the United Way Board of Directors. “It’s a good turnout. It’s a nice event to raise awareness for the United Way.”

The United Way of Greater Fall River’s annual campaign has a goal of raising $1.4 million to benefit member agencies’ human service projects and initiatives. It has collected about 30 percent of its goal. The campaign runs until the end of January.
“It just amazes me how giving the people of Fall River are,” said volunteer Michael McDonald, this year’s United Way campaign chairman. “That’s what the United Way is all about.”

Horne received a citation from Mayor Will Flanagan in recognition of the United Way’s positive work in Greater Fall River on the annual Day of Caring.

“Your team of volunteers have stepped up and make a difference in the community 365 days a year,” Flanagan said.